After the amazing Christmas parade, we turned back and retraced our steps toward the coast to head towards Kaikoura. A good nights sleep and we were ready for the road again, lucky from here on (except for the last day) we planned for shorter stretches in the car. 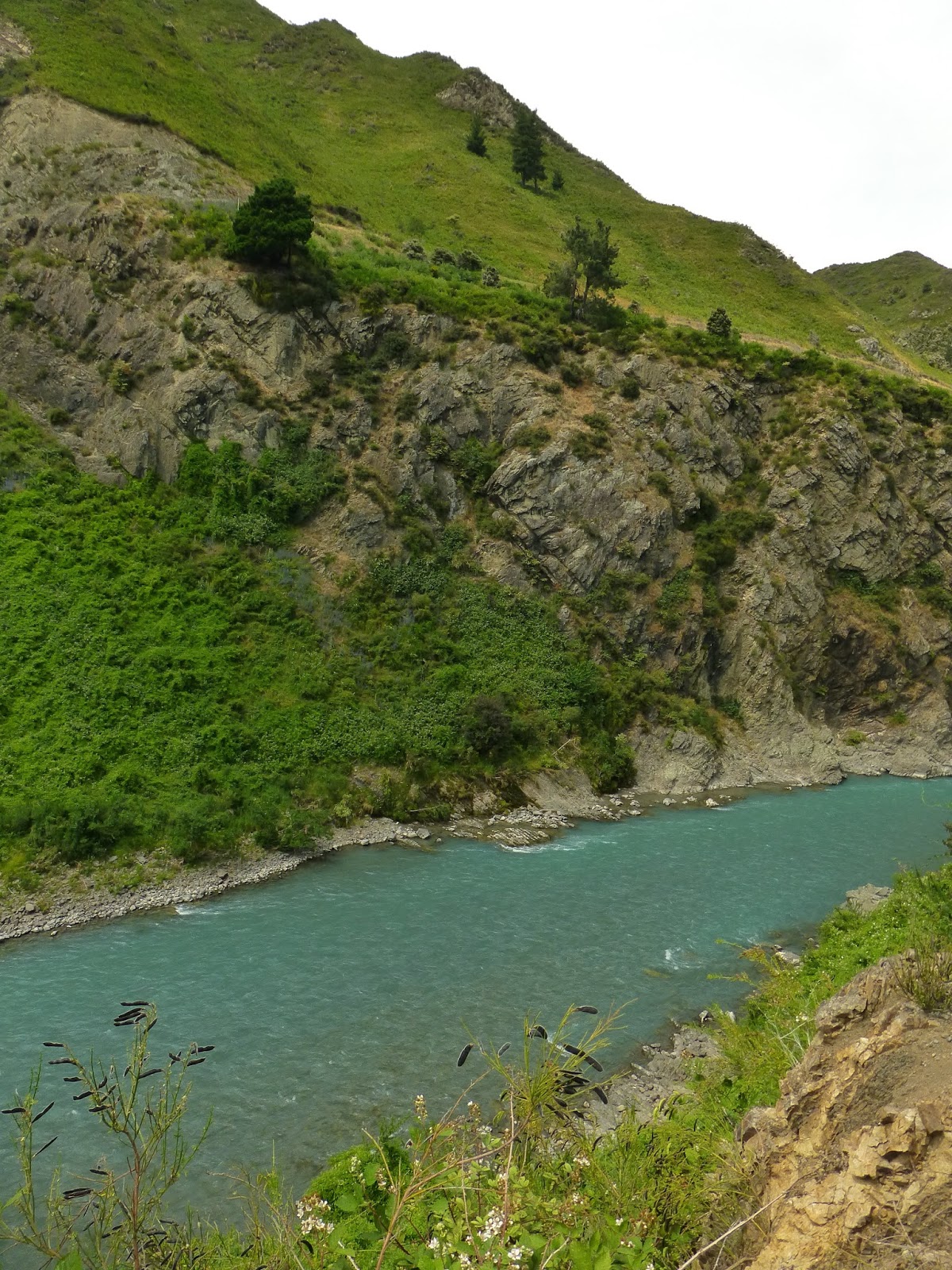 The road out of Hanmer Springs ran through a winding valley.  The Waiau River  wound through the valley along with us. 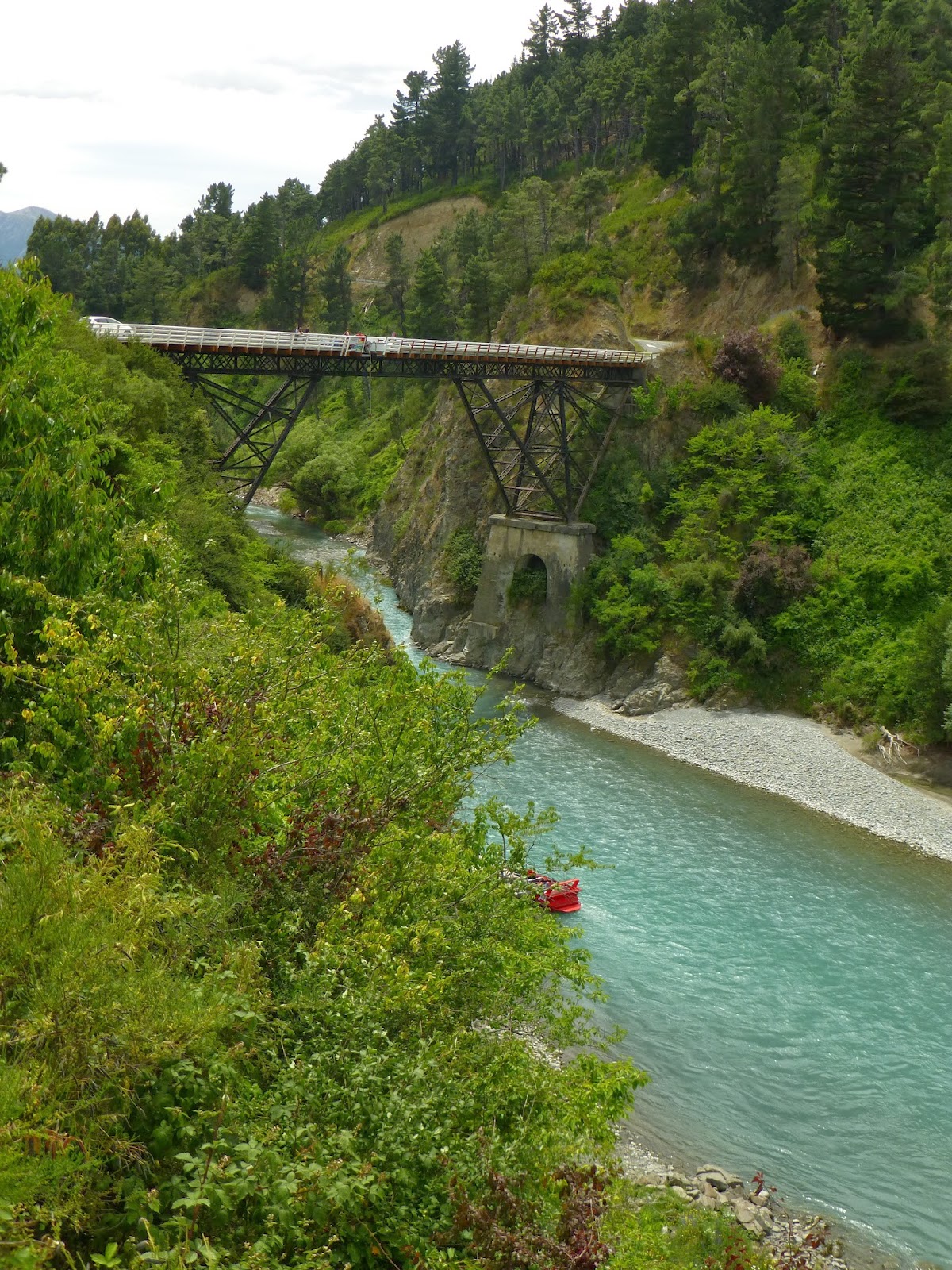 A little way down the road, some people were bungee jumping off a bridge.  We just crossed over that bridge but had to stop to watch the guy jump.  If you look close you can see his bungee rope hanging off the bridge, and a jet boat resting in the river waiting to pick him up after he's down. 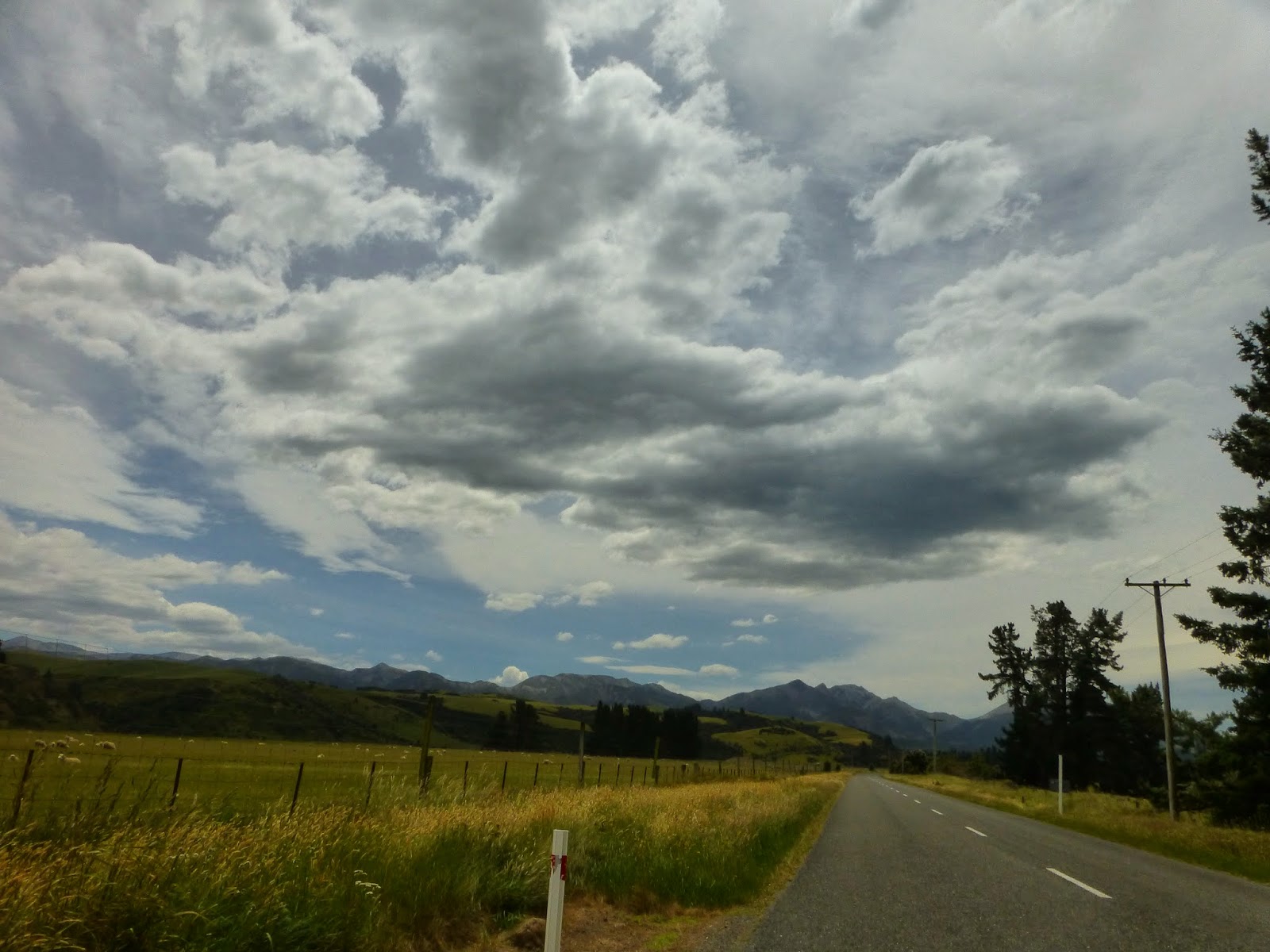 Ahh the open road... A few clouds in the sky but a beautiful day.  A big improvement over the (seemingly) constant rain in Southland.  You'll notice the perspective is from the left side of the road... :) We decided to take the inland scenic route a little further instead of heading straight to the coast again.  You can see the mountains in the distance we are about to head back into. 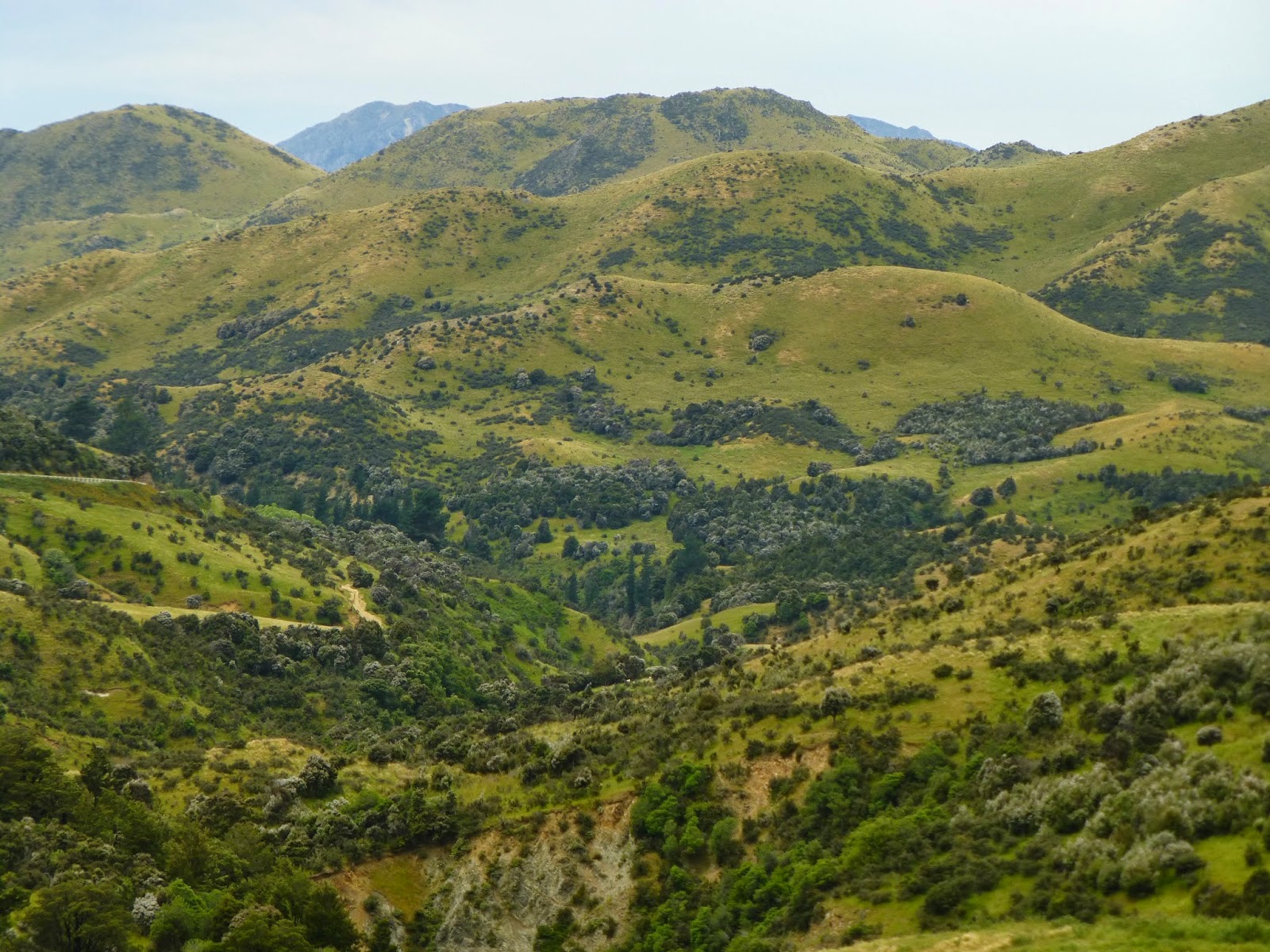 I wish that pictures could pick up the depth of the scenery.  The rolling hillside rolled on and on.  Those are all trees, not bushes, to give you some idea of perspective. 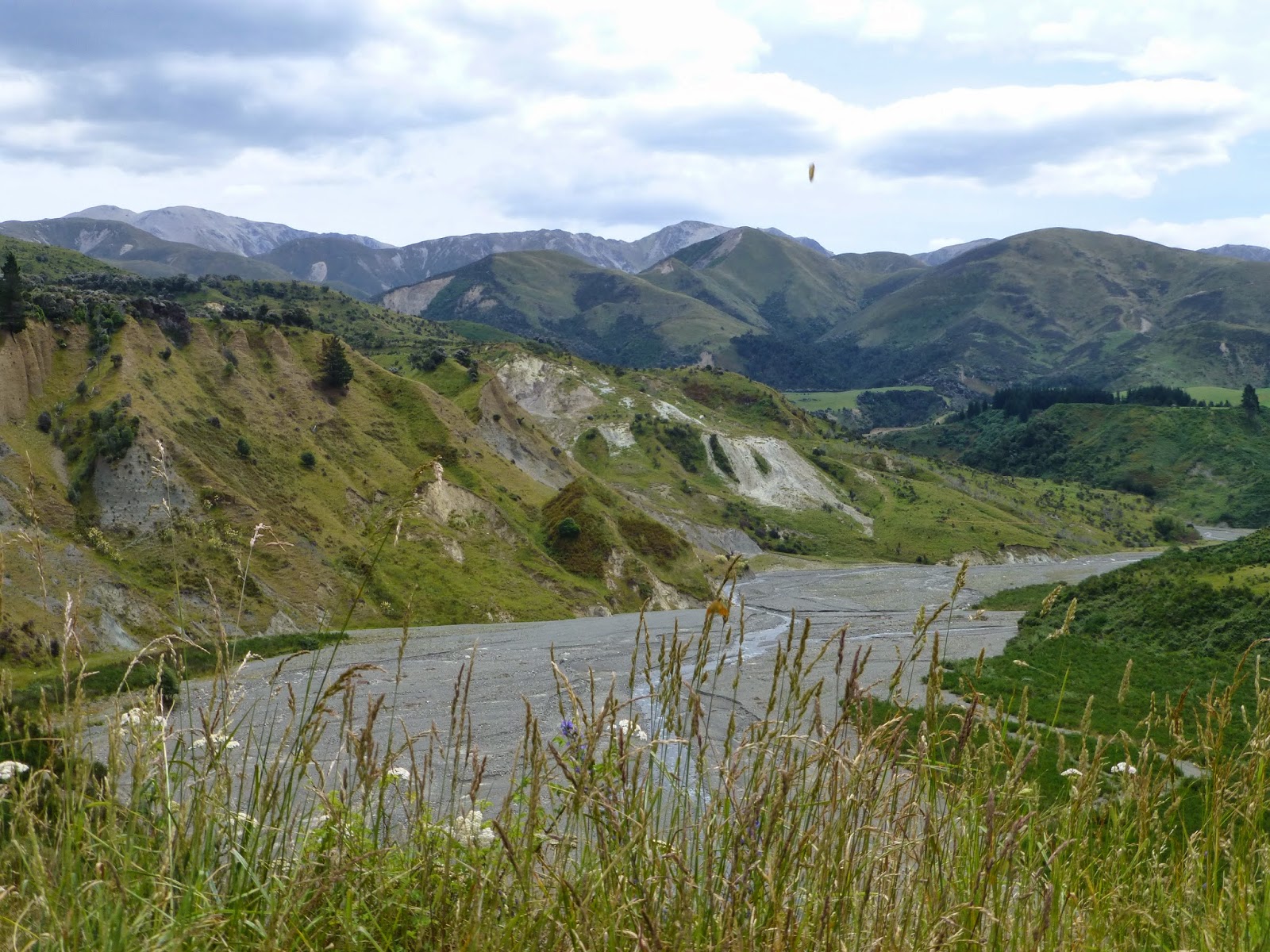 Couldn't quite stretch over the tall grass for this one, more rocky river bed in the braiding river below. 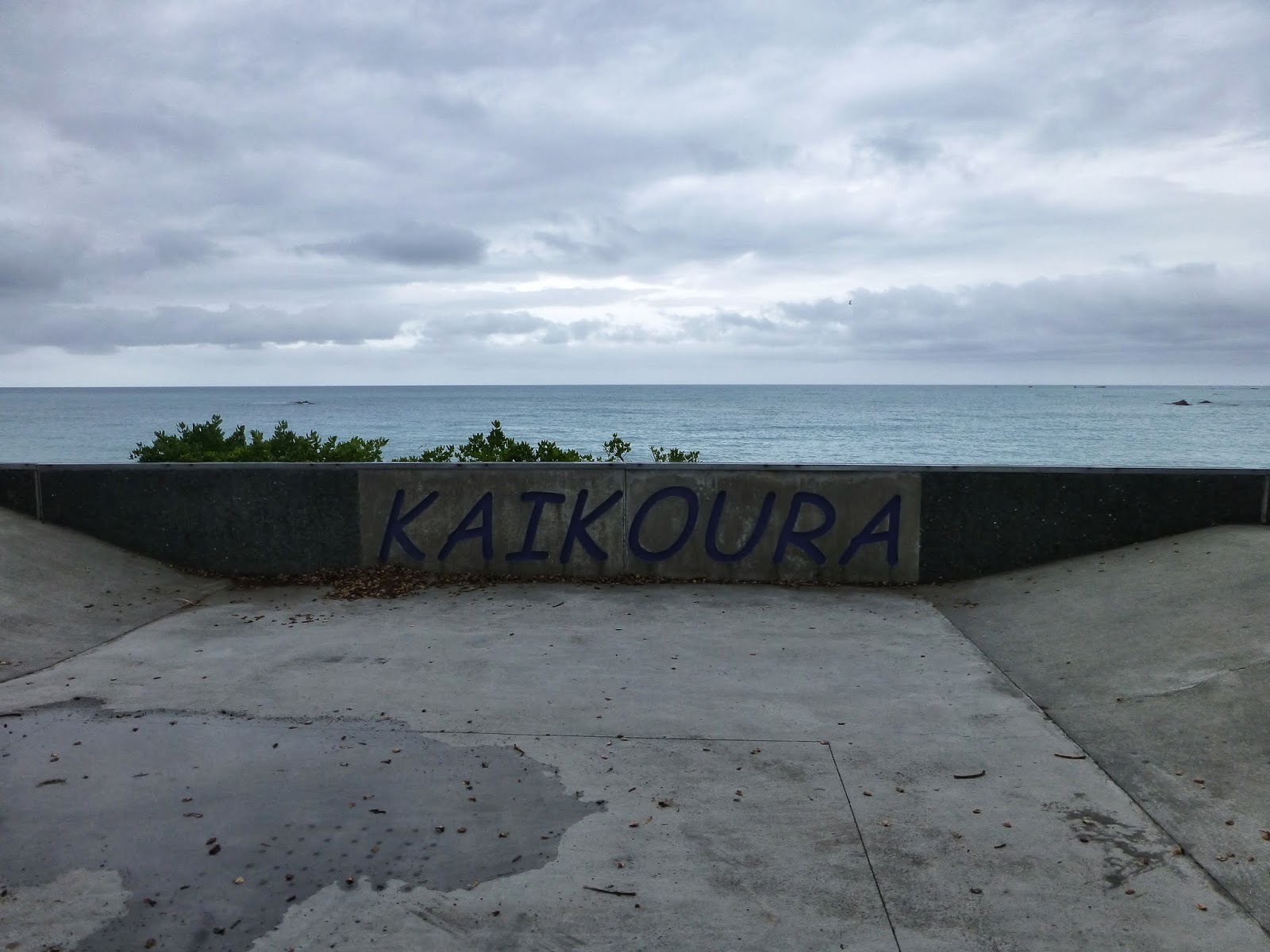 We made it to Kaikoura!  The next stop in our big journey.  It was a little coastal city known for its whale watching (which was the major reason for our stop here).  This was a small skate park that was right on the water that had a nice little sign with the city name.  Not a bad place for a skate, but it has been a few years since I've been on my skate board.  :) 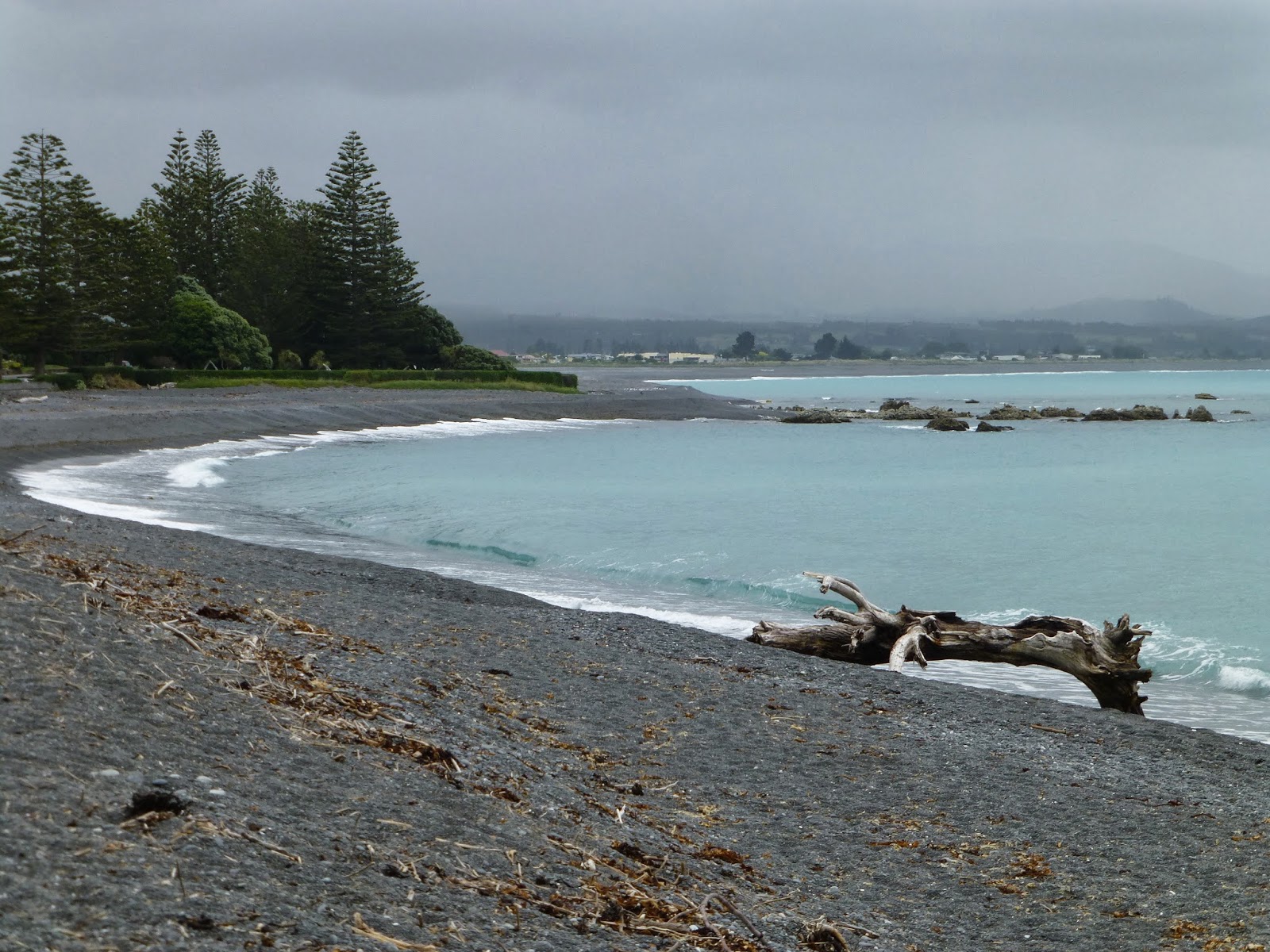 I had celebrated the weather too soon.  The clouds and wind rolled in.  You can see them covering the mountains in the distance.  The rain was inevitable.  We decided to walk down to the coast before it was too late.  The beach was a fine stone with a steep pitch into the surf.  I'm not sure where that big tree could have washed in from. 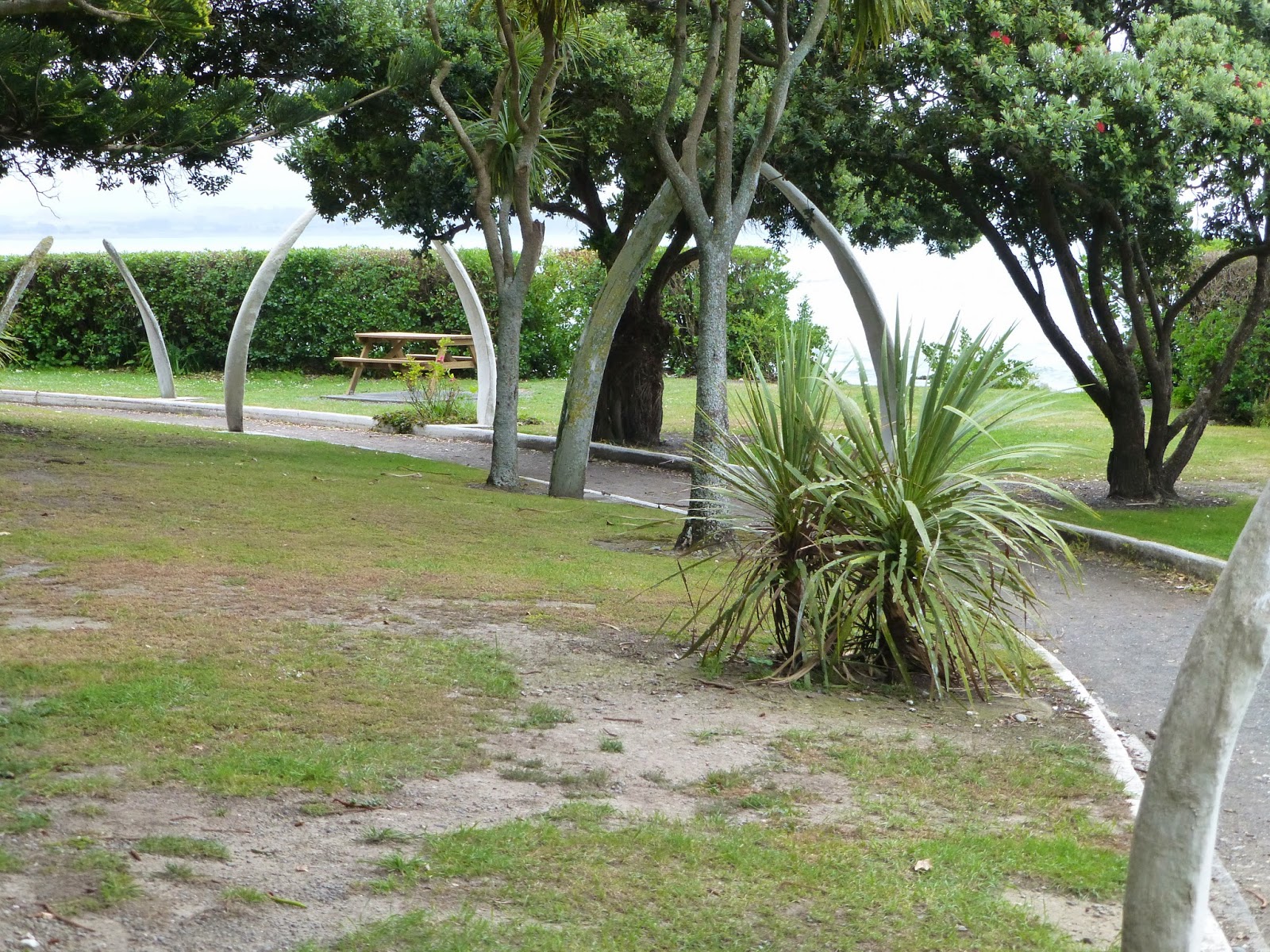 A small city park... Not sure what these are marking the path, perhaps old boat beams?  Lots of little flowers and plants growing here. 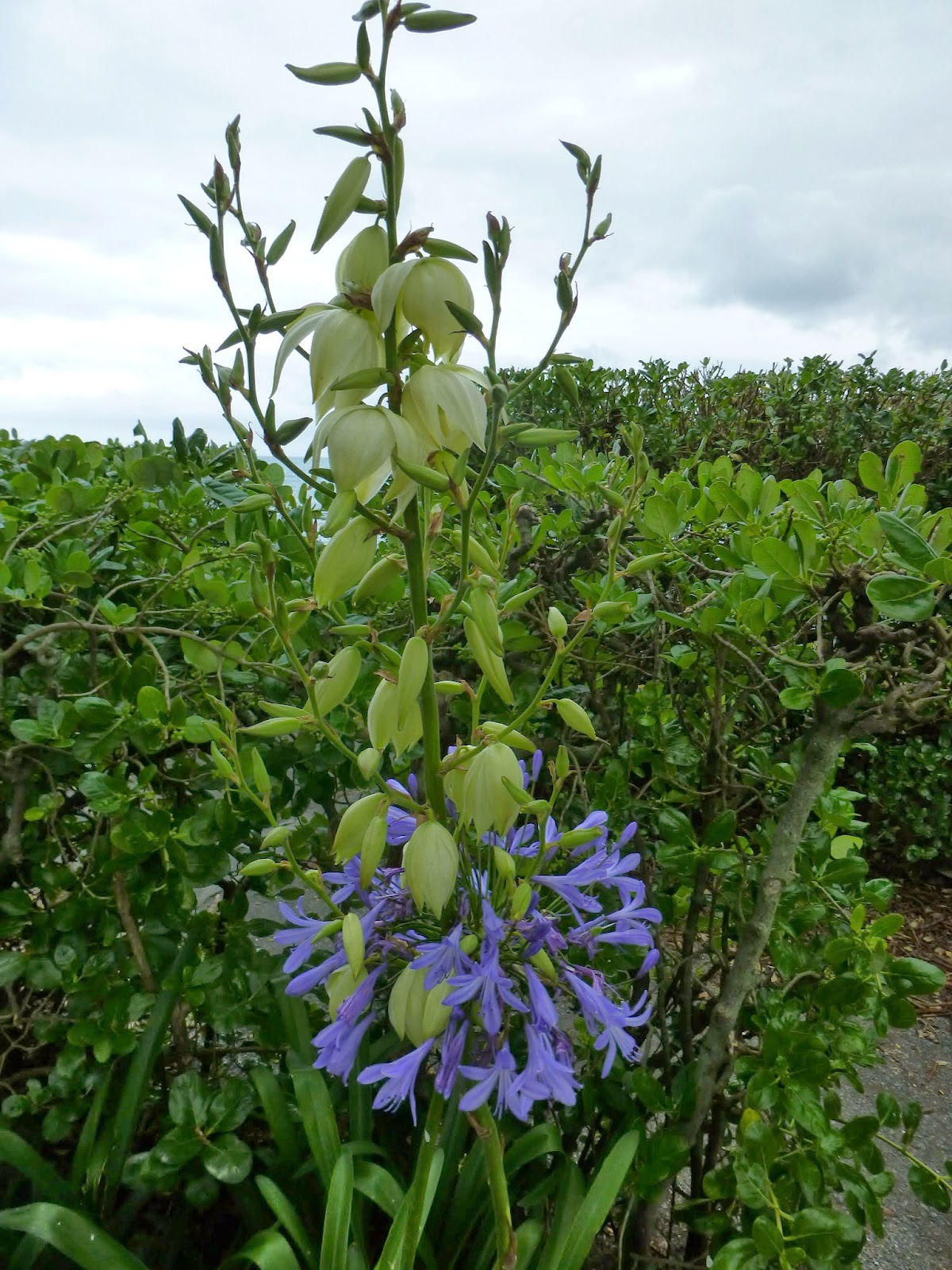 The purple flower is one of Rebecca's favorites here.  The plant usually stops at the top of the flower, but this one seems to have something else growing out of it.  Neat enough for a picture we thought... 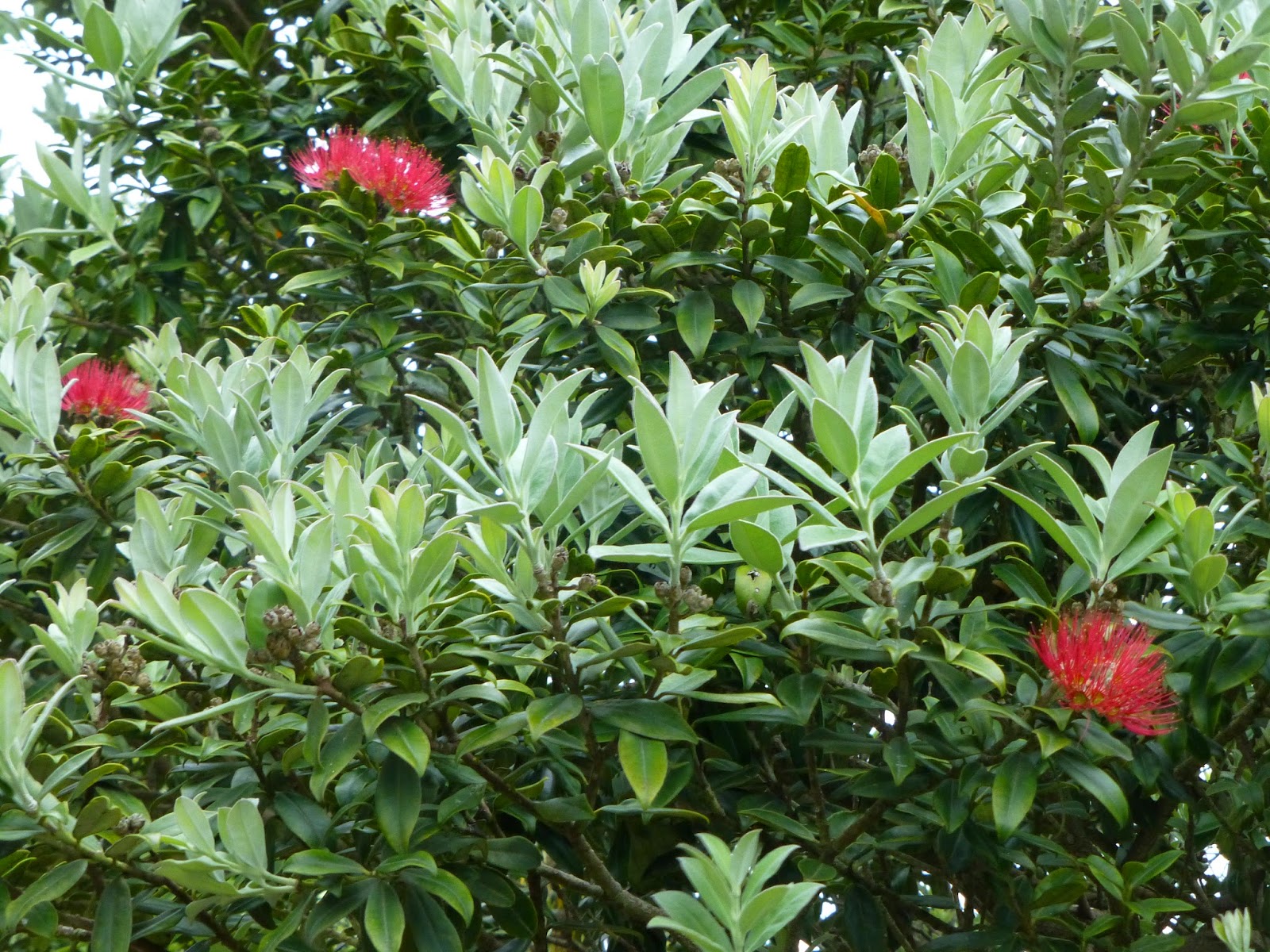 This was one of our first close up looks at the New Zealand Christmas tree!  The pohutukawa tree.  It blooms around Christmas (summer) here.  And very festive when it is covered in its red blossoms.  This one has only just started to open up, but we see more later in the trip. 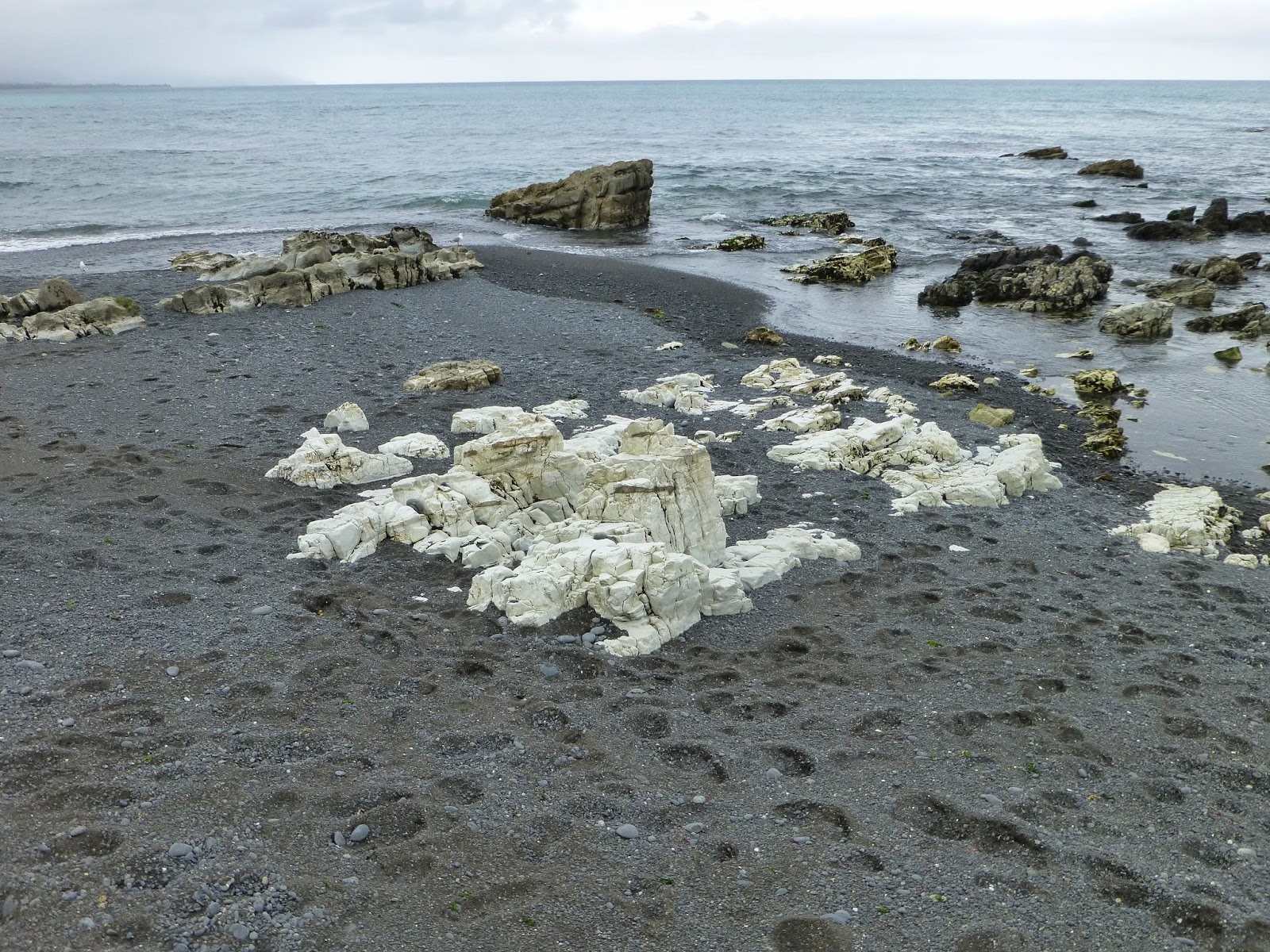 Further down the beach the small stones were nearly black they were so dark, with bright white outcropping of stone in the middle. 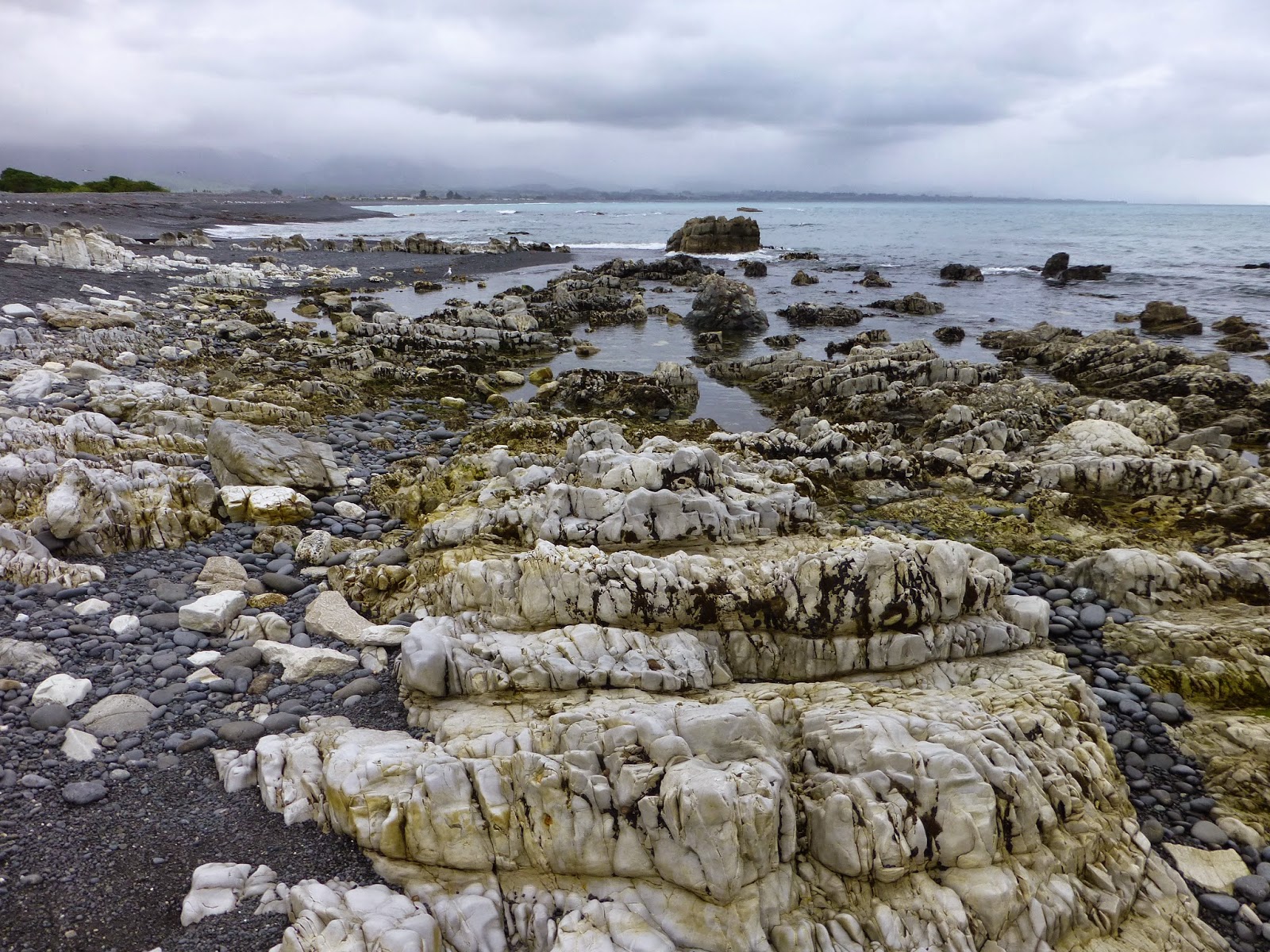 As the tide came and went, it made lots of little pools for various little fishes and snails and things to grow in. 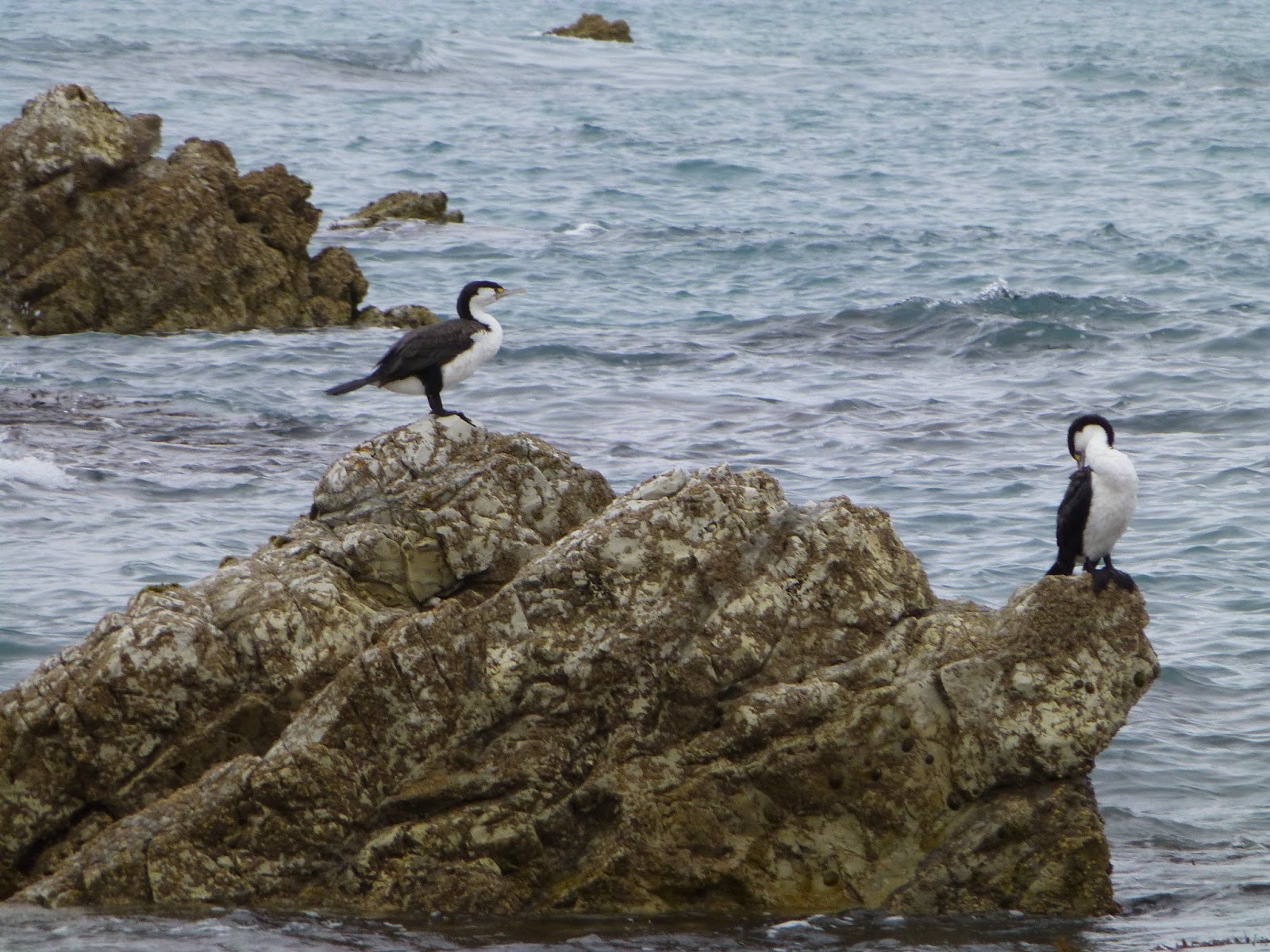 It was the perfect place for a few shags to do some fishing... 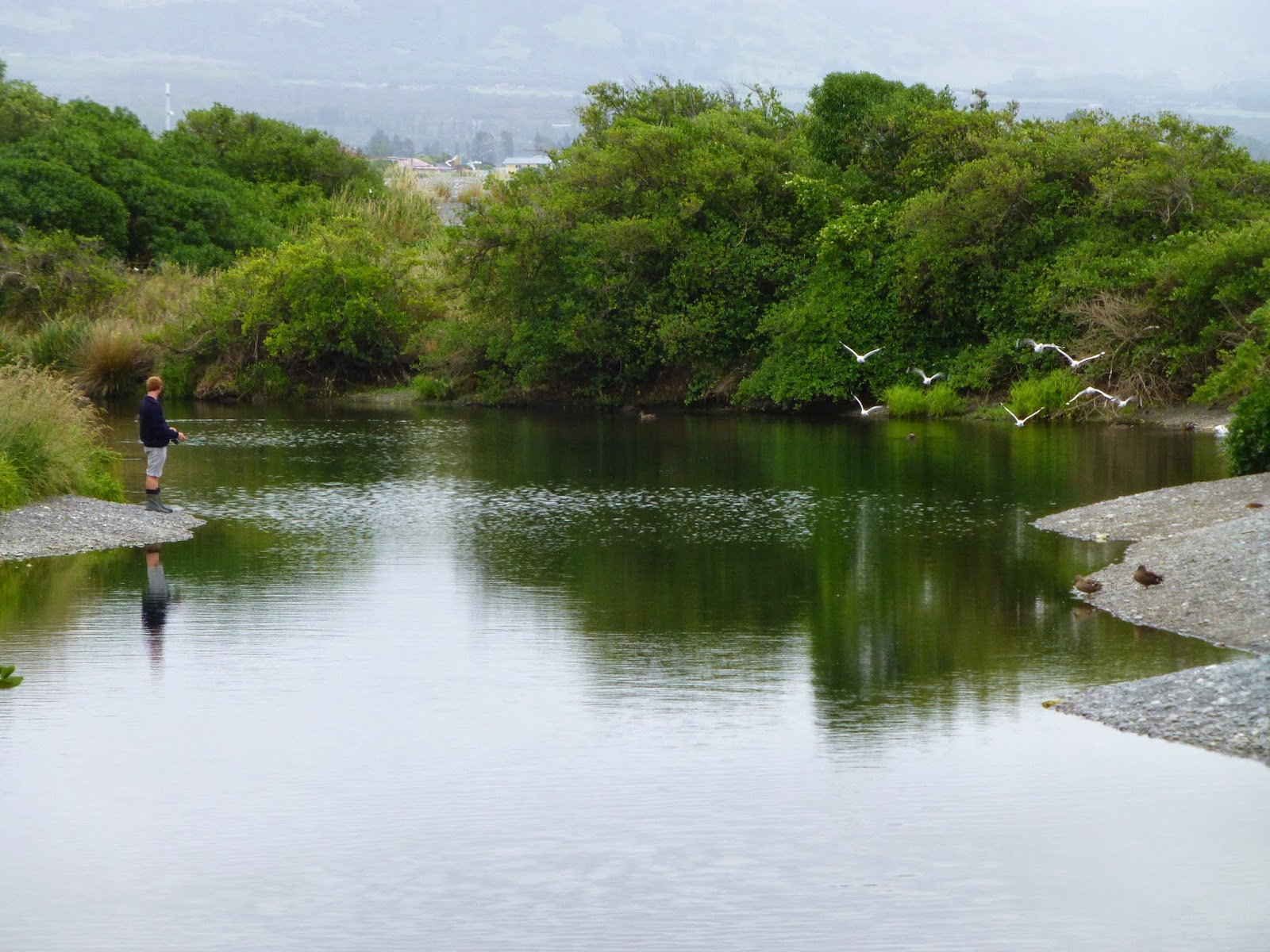 And a small river outlet to the ocean a little further up... the perfect place for local to do a little fishing... 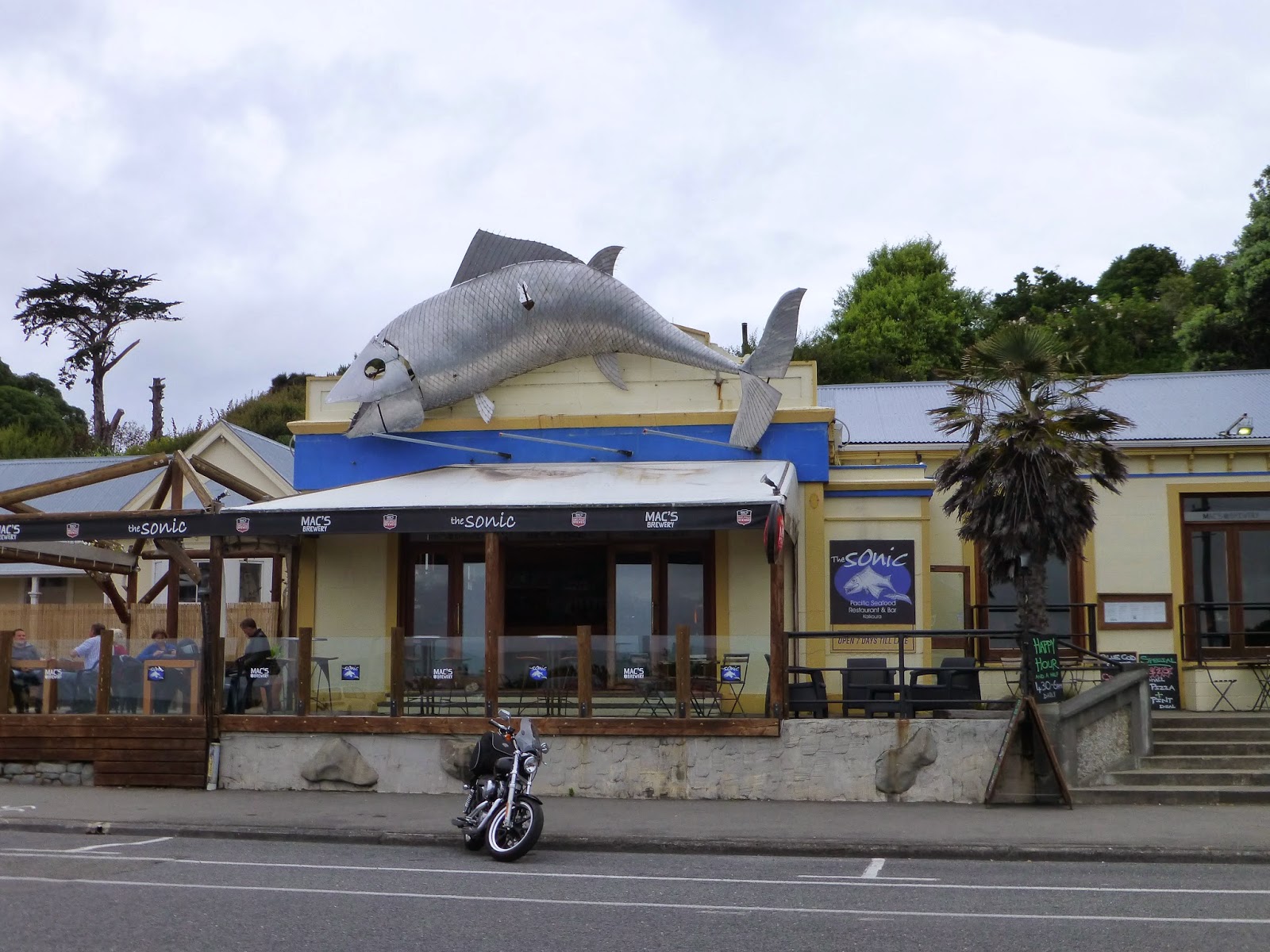 With the weather changing we headed in to find some dinner and do a little shopping.  It was a nice little town with cute shops.  We still had to finish getting Christmas presents, and down the main street here is where we found Cole's epic deer head.  This restaurant had a giant fish sign pounded out of sheet metal... 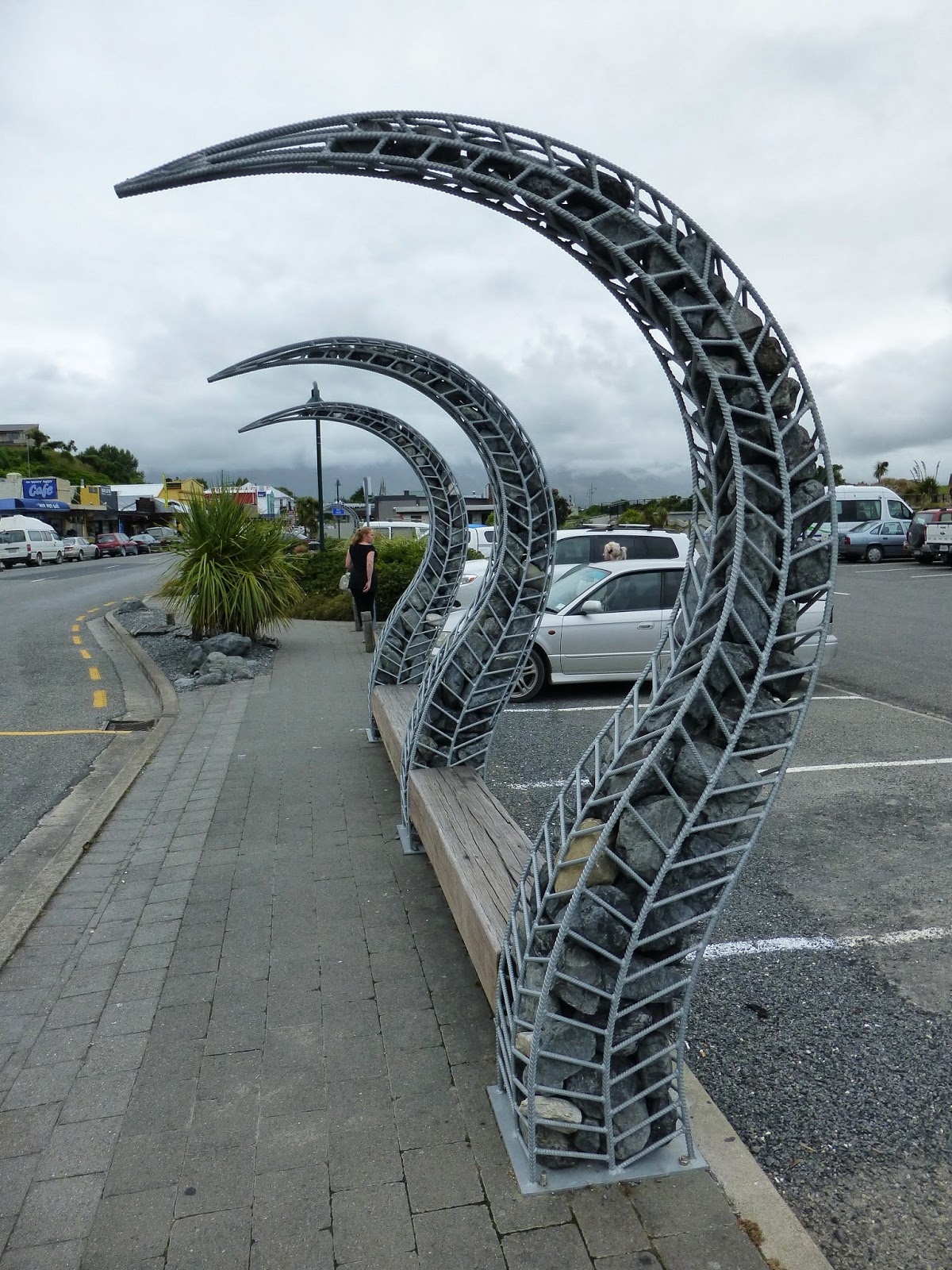 Some street art turned bus stop.  Rebar sculpture filled with river stone.  It looks to be inspired by Maori tribal symbols, either the Koru, the Fern, or the Fish Hook. 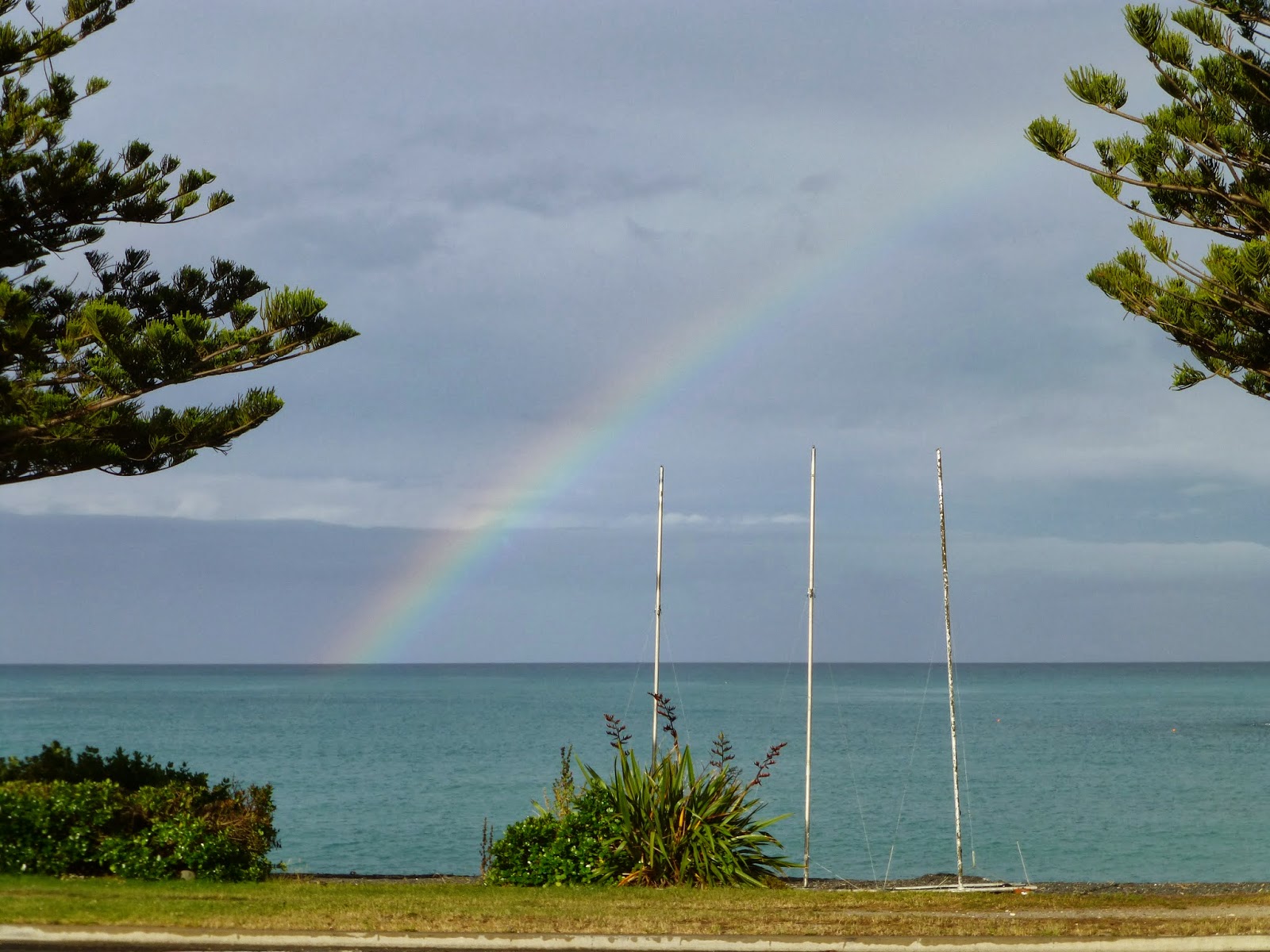 The rain came during dinner and shopping, but let up long enough to see a nice rainbow. 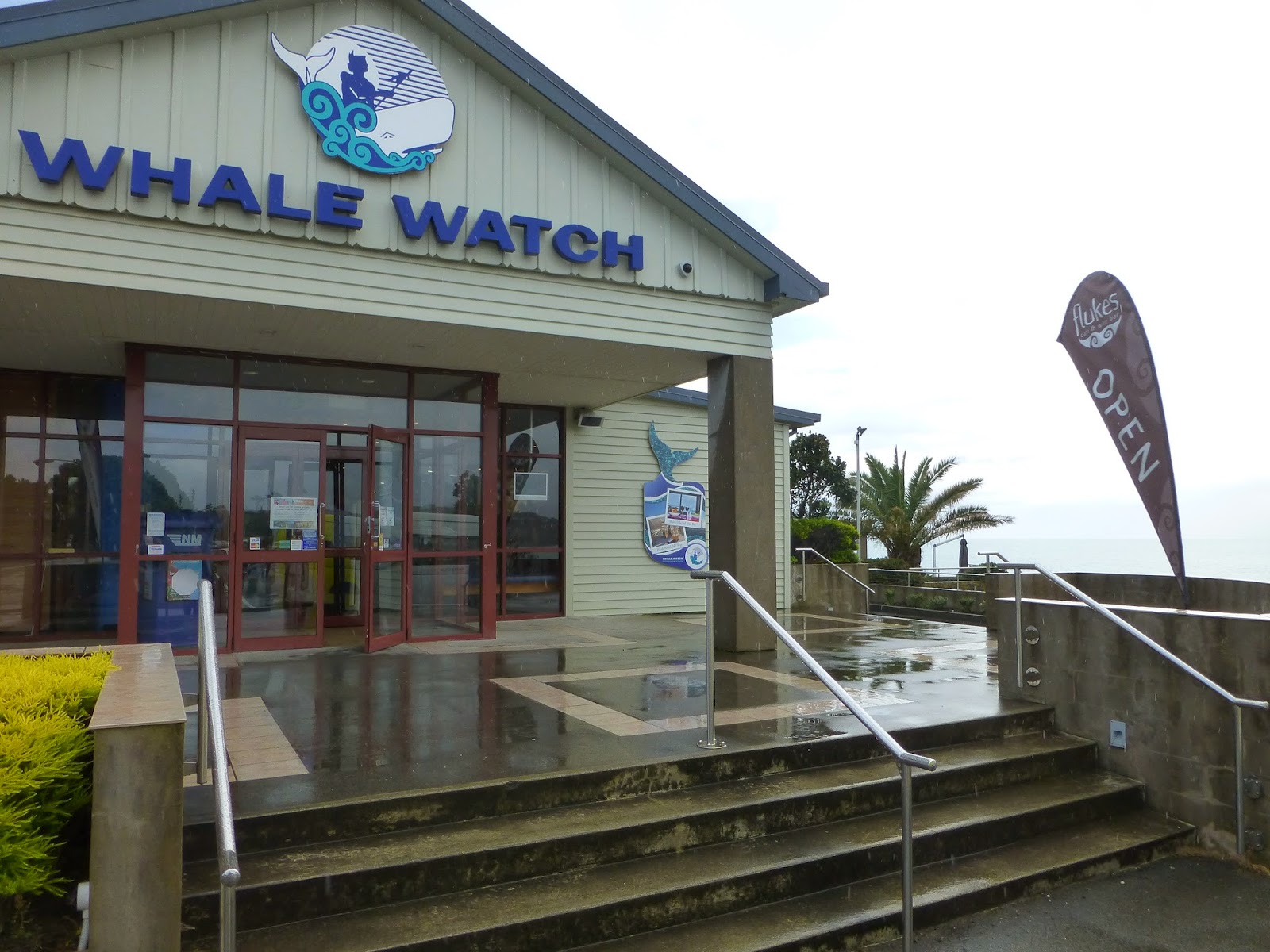 The next morning we headed to the main event!  Kaikoura whale watching!  But it was raining when we arrived... and they had CANCELLED all the morning boats!  And with the rest of our trip too tight to allow for an extra half day, we missed out on the big Kaikoura attraction... :(

We've seen whales in Hawaii before and were very excited, but oh well, you can't win them all.  And other than this the rest of the trip was amazing...

And leaving early we got to see WILD SEALS all down the coast... more on that next time... :)
Posted by Unknown at 2:56 AM